The Catholic Man Show – The Virtue of Vengeance 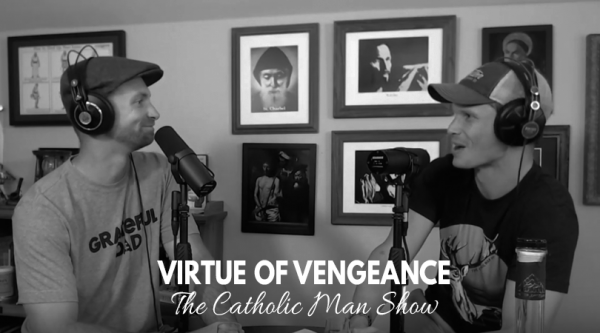 Adam and David talk about vengeance in this week’s episode. Is it lawful? Is it a special virtue? And the 4 sins that cry to Heaven for Vengeance

This episode on vengeance is sponsored by Covenant Eyes. Use promo code “catholicman” to get a 30-day free trial in protecting you and your family from the dangers of the internet.

Do you benefit from our show? Want to help see it continue to grow? Would you like to see more guests in studio? If so, please consider joining us on Patreon. As little as $4/mo makes a big difference. Many hands make light work.

Thank you to Mr. Taylor Barranco for the drink. Fireside Whiskey is a 4 year aged Straight Bourbon that is a nice bourbon to have in your cabinet. It is dangerously smooth but still maintains all of the robust flavor gained from aging for more than 4 years in brand new white oak barrels. A nice end of summer dram.

A miter saw (also known as a “mitre” outside of the United States) is a saw used to make accurate crosscuts and miters in a workpiece by pulling a large backsaw or a mounted circular saw blade down onto a board in a quick motion. Miter saws are commonly referred to as drop saws and abrasive cut off saws are referred to as a chop saw.
Find out more here.

WHETHER VENGEANCE IS LAWFUL?

I answer that, Vengeance consists in the infliction of a penal evil on one who has sinned. Accordingly, in the matter of vengeance, we must consider the mind of the avenger. For if his intention is directed chiefly to the evil of the person on whom he takes vengeance, and rests there, then his vengeance is altogether unlawful: because to take pleasure in another’s evil belongs to hatred, which is contrary to the charity whereby we are bound to love all men. Nor is it an excuse that he intends the evil of one who has unjustly inflicted evil on him, as neither is a man excused for hating one that hates him: for a man may not sin against another just because the latter has already sinned against him, since this is to be overcome by evil, which was forbidden by the Apostle, who says (Rom. 12:21): Be not overcome by evil, but overcome evil by good.
If, however, the avenger’s intention be directed chiefly to some good, to be obtained by means of the punishment of the person who has sinned (for instance that the sinner may amend, or at least that he may be restrained and others be not disturbed, that justice may be upheld, and God honoured), then vengeance may be lawful, provided other due circumstances be observed.

WHETHER VENGEANCE IS A SPECIAL VIRTUE?

I answer that, As the Philosopher states (Ethic. ii. 1), aptitude to virtue is in us by nature, but the complement of virtue is in us through habituation or some other cause. Hence it is evident that virtues perfect us so that we follow in due manner our natural inclinations, which belong to the natural right. Wherefore to every definite natural inclination there corresponds a special virtue. Now there is a special inclination of nature to remove harm, for which reason animals have the irascible power distinct from the concupiscible. Man resists harm by defending himself against wrongs, lest they be inflicted on him, or he avenges those which have already been inflicted on him, with the intention, not of harming, but of removing the harm done. And this belongs to vengeance, for Tully says (loc. cit.) that by vengeance we resist force, or wrong, and in general whatever is obscure* (i.e. derogatory), either by self-defense or by avenging it. Therefore vengeance is a special virtue.

WHETHER VENGEANCE SHOULD BE WROUGHT BY MEANS OF PUNISHMENTS CUSTOMARY AMONG MEN?

I answer that, Vengeance is lawful and virtuous so far as it tends to the prevention of evil. Now some who are not influenced by motive of virtue are prevented from committing sin, through fear of losing those things which they love more than those they obtain by sinning, else fear would be no restraint to sin. Consequently vengeance for sin should be taken by depriving a man of what he loves most. Now the things which man loves most are life, bodily safety, his own freedom, and external goods such as riches, his country and his good name. Wherefore, according to Augustine’s reckoning (De Civ. Dei xxi.), Tully writes that the laws recognize eight kinds of punishment: namely, death, whereby man is deprived of life; stripes, retaliation, or the loss of eye for eye, whereby man forfeits his bodily safety; slavery, and imprisonment, whereby he is deprived of freedom; exile, whereby he is banished from his country; fines, whereby he is mulcted in his riches; ignominy, whereby he loses his good name.

4 sins that cry to Heaven for Vengeance

1.       Murder – “the blood of able”
2.      Sodomy – “the sins of the Sodomites”
3.       Oppression of the poor – “cry of the people oppressed in Egypt”
4.      Injustice to the wage earner – not paying wages owed
a. Dt 24:14-15 – 14 You shall not withhold the wages of poor and needy laborers, whether other Israelites or aliens who reside in your land in one of your towns. 15 You shall pay them their wages daily before sunset, because they are poor and their livelihood depends on them; otherwise they might cry to the Lord against you, and you would incur guilt.
Drinking: Fireside Colorado Whiskey
Gear: Miter Saw
Discussing the virtue of vengeance
If this is your first time listening to The Catholic Man Show, we do 3 things almost every episode:
TIME CODES:
1.) Open, review, and enjoy a man beverage – Minutes 1-12.
2.) Highlight a man gear – Minutes 12-24.
3.) Have a manly conversation – Minutes 24-48.
If you haven’t listened to The Catholic Man Show before, check out our previous episodes here.
Subscribe to our  YouTube channel to watch past episodes.