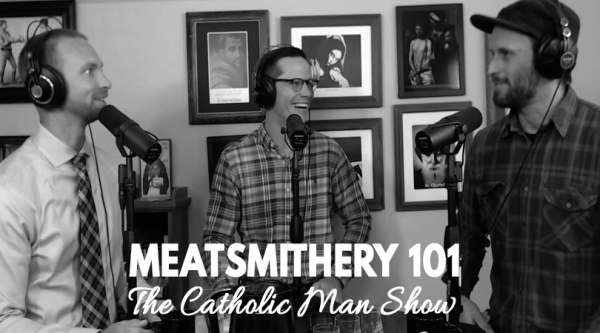 Bonus episode this week!
We talk with Brandon Sheard from Farmstead Meatsmith.
Bacon, curing, smoking meat, and faith. A fun episode – if you want to know more about these topics, make sure to subscribe to their podcast, A Meatsmith Harvest here. #CheerstoJesus

Brandon Sheard’s company, Farmstead Meatsmith, is the only abattoir, butchery, and educational operation of their kind in the country.
He generally harvests for small family farmers who raise a couple of pigs, a few sheep or a flock of various poultry for their own household.  Think very small scale. The animals never leave the land they know, he uses peaceful and humane kill methods specific to each animal’s nature, and he offers every part of every animal back to the farmer.
Unlike many processors, he doesn’t know the meaning of trim.  Well, he does, but that is why he doesn’t do it.  He makes sure the quality fat you meant for your animal to have, stays there.  Consequently, you will get all your meat back.  And by that, he means 100% of hanging weight.  The standard industry procedure is to dispose of as much as 50% of hanging weight.
Currently he reaches farms in Washington, Oregon, Idaho, and Montana.  A handful of farmers and associations have flown Brandon to the east coast, the midwest and the UK.
Because the dinner table is where the rubber meets the road, particularly with unfamiliar cuts, innards and extremities, Brandon makes himself available for advice long after he leaves your farm.

Brandon and Lauren met in the spring of 2007 in southern California while finishing up their graduate degrees; Brandon in Renaissance English Literature, Lauren in Religion and Theology. They dated that summer and fall, introducing each other to Kierkegaard, Milton and de Lubac and by Christmas of that year, were engaged. On the very date of their engagement they were introduced to a home-building project on Vashon, where Brandon’s parents had just migrated to from Ventura County (where Brandon grew up), and they made the move to the Island the following February. They were married June of 2008, when Brandon simultaneously left his job at Whole Foods in the supplement department, in search of more rural work closer to home.
A month later, Brandon was hired by Sea Breeze Farm on Vashon Island. There he was introduced to the arts of small scale animal husbandry, abattoir, butchery and charcuterie and worked there from August 2008-August 2010. After one year on the farm and managing markets, Brandon transitioned to la Boucherie, their restaurant and butcher shop, as head butcher and charcutier. While pregnant with their first child, Lauren helped Brandon in the shop by wrapping meat late into the night before market days, reading various culinary books on the shelves and taste testing recipes (and house made wine) at mid- work day lunches.
As their family expanded (John Luke was on the way), in the fall of 2010 Lauren and Brandon created Farmstead Meatsmith. They work well as a team; Brandon on the front lines of farmers’ fields, butcher blocks and home larders, and Lauren as the accountant, scheduler and professional washer of greasy cutting boards. They both are visionaries for the business and, above all, love witnessing good food brings people together.
Drinking: NA
Gear: NA
Discussing meatsmithery