Kimberly Cook was a radical feminist turned Catholic theologian. She pulls from her past experience, knowledge of the truth, and wisdom to know the difference!

Kimberly has a background in Mental Health and a Masters in Systematic Theology. Her two most recent books are a 7-Week Marriage Workbook focusing on the virtues: My Hand In Yours Our Hands In His, and a 40-Day Devotional for Single Catholic Women: Into the Wilderness.

She is a wife and mother of four – which means she’s constantly working on her own virtue!

The Dignity of Women podcast focuses on reclaiming femininity in the modern age. It challenges feminist viewpoints and the objectification of persons.

The Dignity of Women calls us to higher virtue and nobility of character, so that men must aspire to be worthy of us, and that through Christ, beauty will save the world. 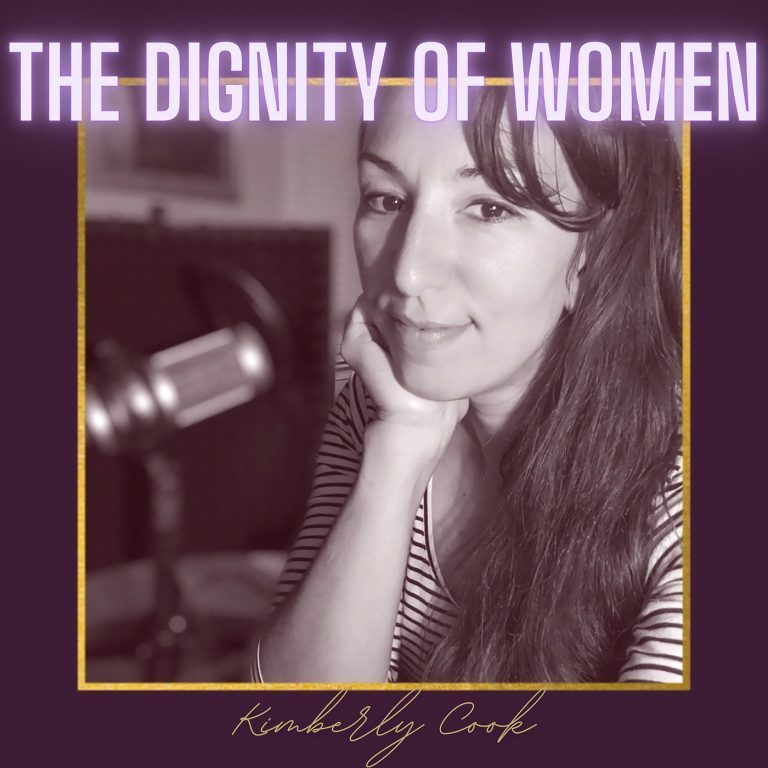 The Dignity of Women

The Dignity of Women podcast focuses on reclaiming femininity in the modern age. It challenges feminist viewpoints and the objectification of persons. The Dignity of Women calls us to higher virtue and nobility of character, so that men must aspire to be worthy of us, and that through Christ, beauty will save the world.

Better Way Designs is a Michigan based company making a real impact on those freed from the sex trafficking industry. Through 9 world-wide supplier locations, Better Way Designs purchases and resells the products made by those who have been freed.  Melanie Schmiedicke joins me on The Dignity of Women to share how she became a freedom fighter and how the emphasis of this mission is on dignity rather than charity.

Melanie Schmiedicke
The daughter of Ukrainian immigrants, Melanie (Fedoryka) Schmiedicke was trained from a young age in classical violin, and performed with her family in concerts across the country. She spent her high-school years in Austria and eventually graduated from Franciscan University and continued to travel and live in various places abroad and here in the US. Now married with four children, she is passing her love for music on to her children, and still enjoys traveling, as well as baking, knitting, and working with others to create freedom for women through her Better Way business.

“Trafficking is a BIG problem. So, we want to be a MASSIVE part of the solution. That is why we have chosen to partner with over 15 other organizations in over 9 different countries to FIGHT it!”

Better Way Designs is a traveling marketplace for many who have been silenced for too long. They recognized that many Americans were willing to purchase, as well as develop freedom businesses of their own, in supporting this mission. Better Way committed to buying and selling products, and then coming back again and again for more. They wanted to keep those freed from sex trafficking employed and believed that it could be done by good business practices. That’s why Better Way Designs is certified by the Fair-Trade Federation and are a certified B-corporation.

“One of our favorite attributes is that Better Way allows ANYONE to be involved in the fight.”

Whether purchasing, booking a freedom party or becoming a Freedom Fighter, this is a way for Americans to get involved and make tangible differences. Each purchase generates a certain amount of work hours for a woman, indicated in the catalog next to each item. These hours translate directly into income for her and her children, and the greater the demand for her work, the more stability she can enjoy.

“Most who work for our suppliers are given health care, child care, education and an opportunity to experience independence. With safe working environments and an opportunity to create impactful relationships, you can see why this is much more than a job. This is dignity in its most active form.”

Freedom Fighter
If you choose to go a step beyond just purchasing products from Better Way Designs, they offer the opportunity to become a freedom fighter.
This is considered the greatest level of impact on those seeking freedom. It also provides income for the freedom fighter, and therefore can become a business for them. This is not only an opportunity to work for freedom, but alongside others who are doing the same thing. You literally become business partners with women around the world who are freed from sex trafficking and making the products!
Imagine spending your work hours to create sustainable freedom for others around the world. Working for a Fair-Trade organization bent on advancing the concept of dignity to those who were once caught in the sex trade by empowering women to run the…

Get the Breadbox Media App today!

Our entire lineup in one place…..your pocket!